Loading...
Loading...
I think we can all agree pecan pie is a must on Thanksgiving. I’ve tried switching it up and my Pecan Pie Cake Roll was a hit so this year I thought I’d see if I could do it again. These Pecan Pie Brownies take everyone’s favorite part of the pecan pie, the gooey, nutty filling, and bake it right on top of rich chocolate brownies. These brownies were out of this world good! The combination of chocolate and pecan pie filling is even better than your classic pecan pie 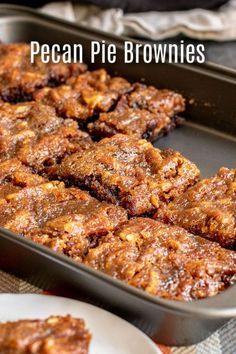 It’s a simple recipe. I used a boxed brownie mix (one that makes a 13-inch x 9-inch pan of brownies) to keep things simple but if you have a favorite brownie recipe you can use that. These brownies will be very fudgy because the pecan pie filling soaks into the brownie as it bakes keeping it super moist. The pecan pie topping is the star of the show and I made it using my mom’s pecan pie filling recipe.

Pecan Pie Brownies are a rich, chocolate and pecan pie Thanksgiving dessert recipe that you're going to want all year long!

Preheat oven according to brownie package instructions.
Combine the sugar, corn syrup, eggs, butter, and vanilla in a small saucepan and cook over medium heat stirring often.
Mix brownies according to package instructions.
Pour brownie batter into a greased 13x9 inch pan and place in oven to bake for 20 minutes.  * see note about cooking time below
As the brownies bake the filling in the saucepan should have thicken enough to coat your spoon (about 15 minutes). Stir the pecans into the mixture and continue to cook for 2-3 minutes until the mixture reaches the consistency of runny oatmeal. You want it to be loose enough to pour over the brownies but not liquid.
When the brownies have finished pre-baking remove them from the oven and pour the pecan pie filling over them spreading it out to cover the brownies completely.
Place them back in the oven and bake for 25-30 minutes or until the filling only jiggles slightly in the middle when you move the pan.

Note: Brownie cooking times vary by brand so the times listed are approximate. You'll want the brownies to bake for half of the bake time listed on the back of the box before adding the cooked pie filling and continuing to bake until the filling is set.


The biggest issue I ran into with these brownies was the brownie not seeming to be baked enough. I have experimented with many different times and discovered that the type of container you baking in (metal or glass) and the brand of brownies can make a difference. Use baking time on the back of your box of brownie mix to determine how long to pre-bake your brownies. I baked mine for half of the time listed before adding my pecan pie filling on top. This gave me a fully cooked brownie with a very fudgy center.
Loading...