This is perfect. First off, I also reduced the amount of cream cheese by half, so it adds body but not too much tangy flavor. Second, I hate the synthetic taste of Cool Whip, so I use real whipped cream, or at least Reddi Whip. Finally (and I know this is a matter of opinion) I prefer it after 24 hours in the fridge, when the Oreos have gotten softer and more cake-like. My kids, however, prefer them same-day crunchy. I had no trouble covering the bottom of a 9x13 pan with the cookies, but I think it helps to grind them finer than the recipe suggests.
Absolutely delicious! The only change I made was to use real whipped cream instead of cool whip. To make the whipped cream, use 3 cups of whipping cream (this will make about 6 cups of whipped cream, corresponding to 16 oz cool whip) with a tsp of vanilla and a few tsp of sugar mixed in. Also, I used the full amount of cream cheese listed in the recipe. I definitely recommend using the entire 2 pkgs of cream cheese. It's not tangy at all, and I think the recipe would be lacking without the cream cheese. I used vanilla pudding, but I'm sure chocolate would also taste good. Highly recommend this dessert, even though it's not healthy!
This was a good basic recipe to play off of. I made the following changes to suit our taste: Cut back cream cheese in half (only 1 pkg). Added vanilla extract to cream cheese picture. Used chocolate pudding but make the pudding as if you are using it for a pudding pie, cut back on the milk. It will hold together better. I processed the cookies a bit more, almost to crumbs. I assembled the layers in a pie pan as follows: Cookie/butter mixture on the bottom, followed by cream cheese mixture, followed by more cookie crumbs, and I added a little milk to soften the cookies. On top of that I added chocolate pudding, and finished with cool whip, chocolate cookies. It was great, it stayed together and cut perfectly. 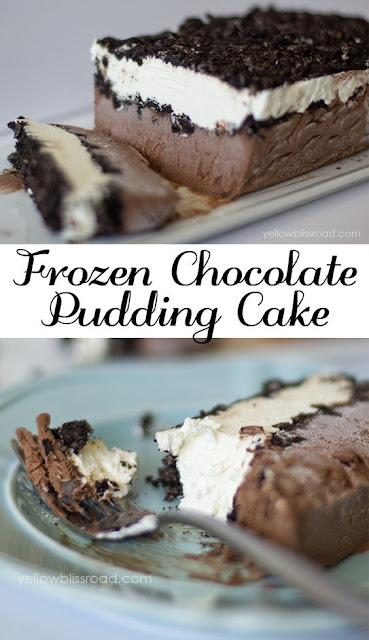