First of all, I did not make this recipe because it was vegan, I made it because it is a Myplate sponsored recipe. After reading the reviews, I decided to leave the oil out entirely. The recipe author said that the avocado replaced butter in this recipe, so I couldn't wrap my head around the need for any more oil if it was a replacement for oil. There is enough "oil" with the combination of the avocado, peanut butter and chocolate chips. Next, I halved the recipe and made it in an 8x8 baking dish. I used regular 1% milk in place of the soy milk (Again, not looking for this to be vegan) and doubled the amount called for.
I didn't bother with "cooking the chocolate, sugar and pb until bubbly like candy"...I simply melted the pb with the chocolate chips in the microwave. I think cooking melted chocolate chips to this degree of heat would cause the chocolate to seize, giving you a gritty texture. I used my magic bullet to combine the milk and the avocado and then combined the rest of the ingredients in a large bowl (including the sugar, which I reduced to 1/2 cup for half this recipe). I added the melted chocolate/pb, the avocado/milk, a 1/2 tsp of vanilla extract and the flour mixture together and combined until just mixed. I baked them for about 20 -25 minutes in an 8x8" pan and they came out really nice. Not greasy at all. Smooth and fudgy. 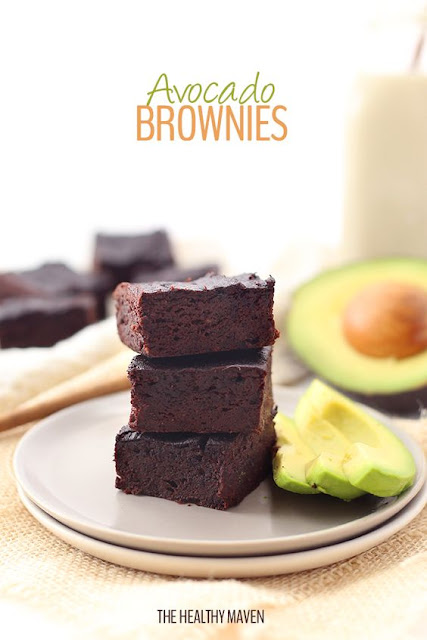