Yummmmm! I hardly never make desserts for the low carb family, but this one looked so easy. Yes definitely a keeper. I did use 2/3 c.of Splenda. I may have gotten carried away with the beating, but it turned out great. In fact, I just put it in the fridge and had to run to review it.
At first I thought the recipe was wrong and that I might need to whip the whipping cream, but decided to prepare the recipe exactly as written. The recipe instructions say to lightly fold in the whipping cream, so I thought it might have supposed to have been whipped first. It turned out great just as written. This sets like a regular cheesecake, only lighter in texture. It is still firm enough to be cut with a knife, though. I doubled the recipe because I grabbed the wrong size box of jello. It doubles quite nicely and was delicious. 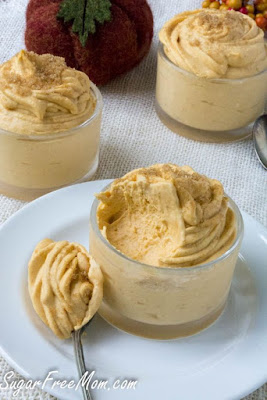 My husband and I just started atkins. I made this with half and half instead of whipping cream. I got 6 servings from this recipe 1/2 cups. I used strawberry sugar free jello. My carb count was 16 net carbs for the entire batch. I did whip the half and half in the cheese jello mixture and it came together nicely. I tried just folding it in like the recipe states but I had nothing but chunks. When I used my mixer it worked great.
Get the full ingredients and instruction click here >>>>> Low Carb Pumpkin Cheesecake Mousse @ sugarfreemom.com