I made these scones for a friend who loves cheese and garlic. As many reviewers suggested, I upped the butter to 6T, used 1/3C cheese instead of 1/4C and used 2/3C of milk. I had no idea what a 3/4 pinch of salt was, so I used 1/8 tsp. I also used 1 garlic clove. I've made other scones and the baking temp was 350, so I used that. It was too low - it took forever to bake them, so I would suggest a 375 or even 400 degree oven. (Maybe it makes a difference that I have a gas stove??) I also used my Bosch bread maker to mix it - that way I wouldn't be handling it much and warming up the dough too much. Worked great. Now, I asked my friend to rate these. She said that she gives it a 5 out of 5. Her suggestions were to use 2 cloves instead of 1 (she couldn't pick up the garlic flavor, she thought it was onion) and maybe use a heaping 1/8 tsp of salt. Other than that, she thought it was great and definitely wants to make more of these. She does not over indulge in food, but even she had a hard time staying out of them. Thanks for this keeper recipe.
The reason why I chose to make this recipe is because it's lower in fat (butter) than the other scone recipes. THe dough is sticky, which I think gave the scones a light consistency after they're baked. I baked mine in a round pan and had no problem shaping the dough.. very delicious and not greasy at all..yum. 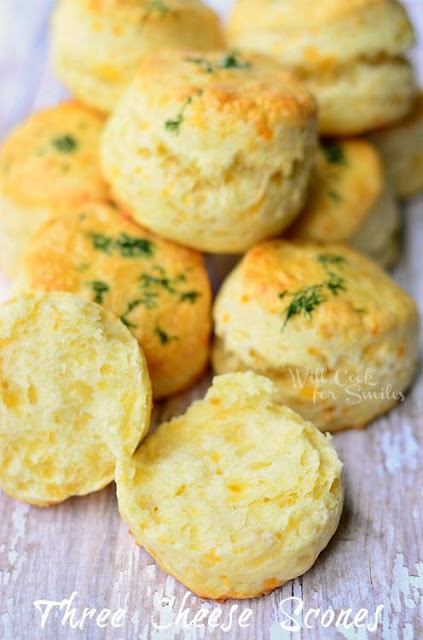